" I had been doing this for over 30 years since I was a young child. It had caused me so much embarrassment throughout my life, in my personal life and also at work. I came to you to stop nail biting - IT WORKED! "

Among children, nail-biting is a particularly common habit, one which carries on into adulthood. There are many reasons as to why a person bites their nails or the skin around them or even their fingers!

In the majority of cases, the habit finds its roots in childhood and from then on, grows with them. For many people, it's an unconscious habit. One without reason - they are simply unaware of what they're doing.

Nail-biting is merely exacerbated by stress and/or anxiety.

There are many reasons why a nail biter would like to stop:

If the biter does persist in doing this, it can result in:

People have devised countless methods to bring their nail-biting to a halt - anything from plasters over their nails, wearing gloves, applying stop-biting nail polish and more! 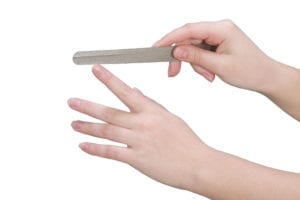 In the end, only willpower and a session of retraining will work.

Not of the body, but of the mind.

It has to be trained into realising that your nails should be treated with respect and that they require care.

As good as Fast Track Hypnosis is, it will not provide you with visible, immediate results. It will retrain your mind and the way you think, but it can't Fast Track nail growth in 30 Minutes! IT TAKES TIME!

On occasions, clients have phoned me two or three days after the treatment informing me that their nails have yet to grow. Almost as an addendum, they mutter they've stopped biting them.

They fail to realize that this is the most important part! Nails take time to grow- I can retrain your mind, but I can't force nature!

Regardless of past attempts, regardless of repeated failures, Fast Track Hypnosis will enable you to cease your nail-biting and fingerpicking habits and without external help, solely by willpower alone.

Nail-biting is a subconscious action. Making a conscious decision to stop won't combat such action and failure is almost always imminent.

Without even realising it, people bite their nails and attempting to stop such a habit by willpower alone is quite difficult as nail-biters fail to understand what they're doing.

If you want to stop biting your nails and now, then the Belfast Hypnotherapy Centre and Alan Gilchrist's Fast Track Hypnosis is for you.

It alters behavioural patterns and affirms the decision you've made. By implanting positive suggestions over the negative and into the subconscious, you'll no longer have any desire to continue your habit, and it will simply disappear.

A Support CD or Download is part of the Fast Track package and will reinforce our work together.

Hi Alan, Just a little note to let you know that my wedding went off without a hitch. I am absolutely delighted to tell you that my nails had grown in time for the wedding and I wasn't the slightest bit embarrassed about getting my rings photographed. Thanks for making my day.

Hi Alan, thank you for helping me to stop biting my nails (and the skin around them). I have been doing this for over 30 years It has caused me so much embarrassment throughout my life. I am a teacher so my chewed fingernails were always on show. Thanks for everything.